Is my back pain from a strained muscle? 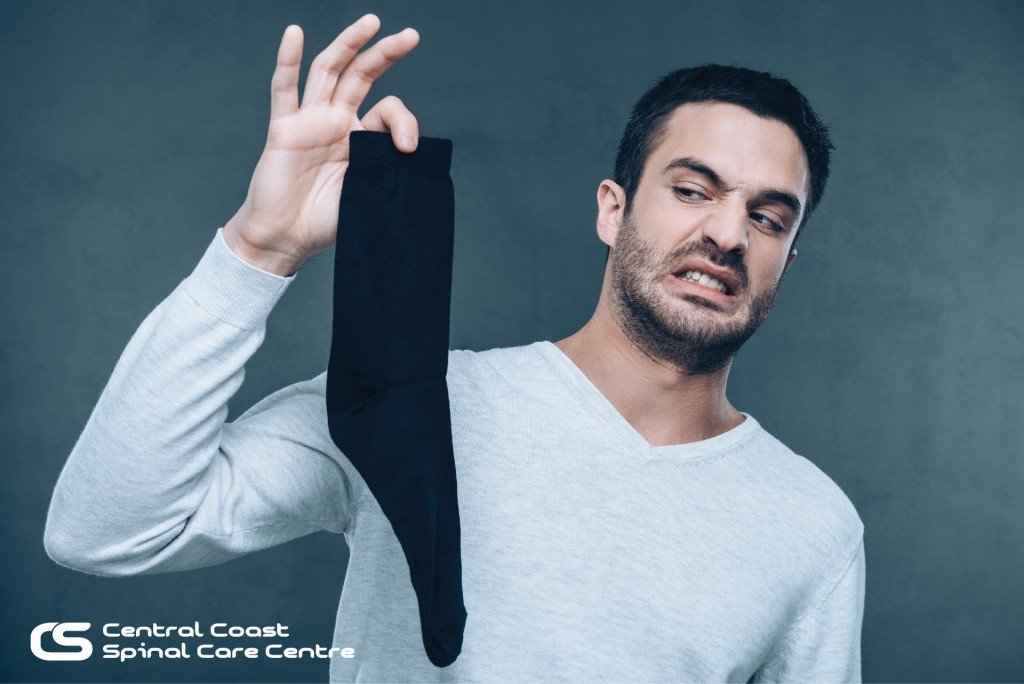 A typical day for a chiropractor starts when Ewan shows up, as a new patient. Ewan, a 45 year old office worker, has severe, acute low back pain that started after he picked up one of his socks, after being yelled at by his wife, because he left it lying on the bedroom floor (again). Ewan has had recurrent low back ache for ages, maybe it has been months, maybe even a year. These recurrent aching episodes seemed to “just get better”, although they always showed up at annoying and inconvenient times. But they were never as sharp or severe as this morning. A friend at work told him that he’s “strained a muscle”.

Has Ewan really strained a muscle by picking up a 10 gram sock? Probably not. So what else could produce that sharp low back pain?

Believe it or not, muscle strains are a much less common cause of back pain than you may think. Firstly, it is important to remember that for any moving part of our body to function optimally, the following is needed:

It is useful to think of all of these as one unit. Problems in any of these three parts (joint, muscle, nerve supply) will affect the other two. To put it another way, if one is not working properly, there will be a problem with the other two.

A healthy muscle is a very strong structure. To strain or tear a healthy muscle significantly, considerable force production is required. Think of how much force is put through the muscles of very explosive athletes, like sprinters. These are not the levels of force seen in the ordinary home or work situation. Certainly, there is no Olympic level sock tidying event.

Unhealthy muscle can be injured. You may have heard of “repetitive strain injury”. This is essentially a problem of chronic overuse, in which the affected muscles aren’t given sufficient time to recover after repeated small strains, and the injuries, small tears, scarring and avascular damage (damage from reduced blood supply) builds up over a long period of time, eventually accumulating enough damage to create a partial or full tear. While repetitive strain of the spinal muscles can occur, a partial or full tear rarely happens around the spine, and is more commonly seen around the shoulder, and sometimes around the hips.

So, if it’s unlikely to be a muscle, what is producing Ewan’s pain and disability. There is a good chance it will fall into one of three categories: a sacroiliac joint pain, an intervertebral disc pain (commonly referred to as ‘slipped disc’) or a facet joint pain. The good news for Ewan is that in most cases, these conditions will respond well to treatment in a chiropractic office. We’ll get into more about discs, facets and sacroiliac joints, in future articles.

Why do we get pain arising from any of these structures and what leads to the point where a fully capable bloke like Ewan is turned into a world of pain? Chiropractors are asked this often, and the answer isn’t always as simple as one would hope. In the case of a trauma it is easy to point towards the exact cause and mechanism, but in the absence of significant trauma (as in Ewan’s case) there are a number of potential causes.

Traditionally, chiropractors have pointed towards stress as a cause of disease in the body. Stress can be chemical, physical and/or emotional. Any internal or external disruption/stressor to your nervous system will affect the body. It is important to remember that the central nervous system ultimately controls movement of our body, including the spine. If these control mechanisms are compromised it is easy to imagine that our movement will be less than optimal and aberrant movement will eventually lead to a problem in your musculoskeletal system. In Ewan’s case, this may have been a number of years of slouching at a desk, filing TPS reports.

When control of a joint is compromised, the muscle stabilising the joint tends to go into a spasm, “fixating” the joint. As chiropractors, we recognise this as a restricted vertebra in the spine. By adjusting the vertebrae, we restore normal movement and normal communication between the brain and the supporting muscles of the spine. It is interesting to note that the adjustment actually restores the movement in the muscles around the spine, and the bone itself is merely a leverage to restore the deep stabilising muscles of the spine. These deep muscles have a very intricate relationship with the brain and other parts of your nervous system.

As you can see, simply stating that a back pain is present because of a “strained muscle” is overly simplistic. Our bodies rely on many different components to work together harmoniously to keep us functioning. Any disruption to this harmony of movement and communication can lead to reactive spasm, further abnormal movement, inflammation, nerve compromise, and ultimately pain. Chiropractors seek to discover the cause of disrupted movement and function, and restore that movement, while educating about prevention. In many cases, quite simple procedures and advice can relieve a great deal of imbalance and allow the body to do what it really wants to do– heal!

Stay tuned for future articles, in which we discuss the function and dysfunction of discs, facet joints and the sacroiliac joints.

About the Author: Dr Øystein Kåsa

Dr Øystein Kåsa moved from Norway to study at Macquarie University in Sydney, where he graduated with a Bachelor of Chiropractic Science and Master of Chiropractic Science in 2010. He has undertaken additional training in functional neurology, and continues to further his knowledge in this area, for the benefit of his clients and to further his keen interest in creating a well rounded treatment approach. He completed his first Bachelor Degree in Exercise & Sports Science at The Norwegian University of Sports. After completing his Masters Degree at Macquarie University, in Sydney, Dr Kåsa spent two years gaining valuable practical experience at one of the busiest chiropractic clinics in Norway, and has spent his last three years working in rural NSW.